A tool and a method for friction stir welding

Friction stir welding (FSW) yields many excellent joint characteristics and has been applied to aluminum alloys in various industrial fields soon after its development. However, FSW of steel materials (accounting for a major part of structural materials) has not yet been practically realized on a full scale, owing to issues such as price and durability of tools. While studies on FSW using tools made of polycrystalline cubic boron nitride (PCBN), Co-based alloys, Ir alloys, cemented carbide, and ceramics have been reported to date, a problem encountered in these studies is that tool materials reported to yield a long tool life are expensive. Accordingly, FSW tools at a lower price and with a longer tool life are urgently required.

The present invention provides a tool for friction stir welding (FSW) that realizes a tool life more than 30 times longer than that of conventional tools.

The present invention provides a tool with a nearly hemispherical probe shape. Although the probe (conventionally with a cylindrical shape) breaks owing to progression of wearing and the process load during a welding process, a nearly hemispherical probe shape suppresses wearing of the probe as well as breakage of the probe at its base. Moreover, the inventors have confirmed that a probe with the said shape was capable of sufficient friction stirring of the material to be welded and formed a satisfactory weld without any defect.

A tool for friction stir welding (low price and high durability).
Suitably used for welding of high-melting-point metals such as steel.

Applied in Japan (JPO), not yet published. 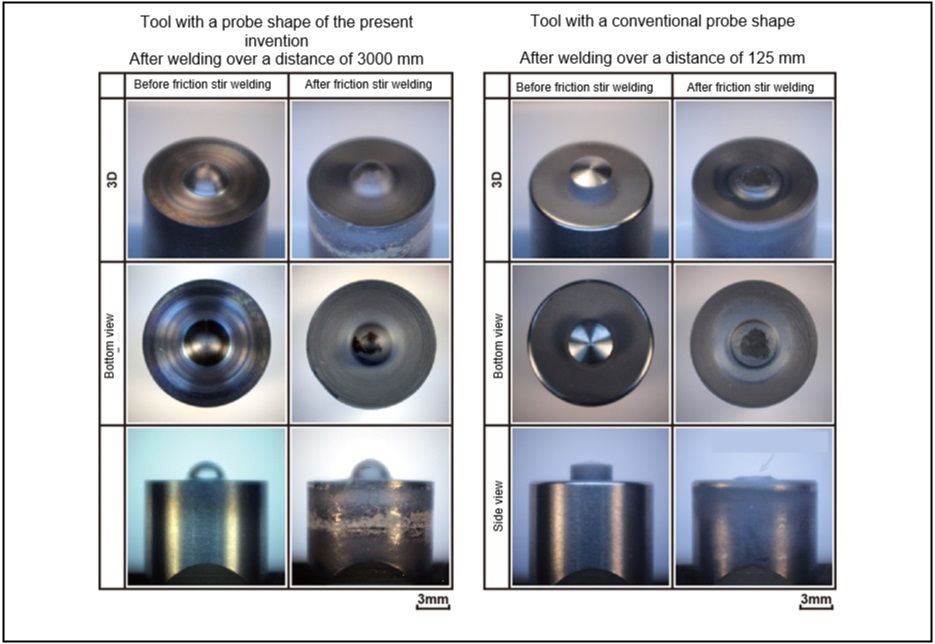